Google Translate is an application to translate one language to another in real-time. It not only translates words and short phrases, but also long sentences and even articles. The google translate app can translate from handwriting, voice and camera, and outputs speech and text-over-image. This post explains google translate architecture and technologies. 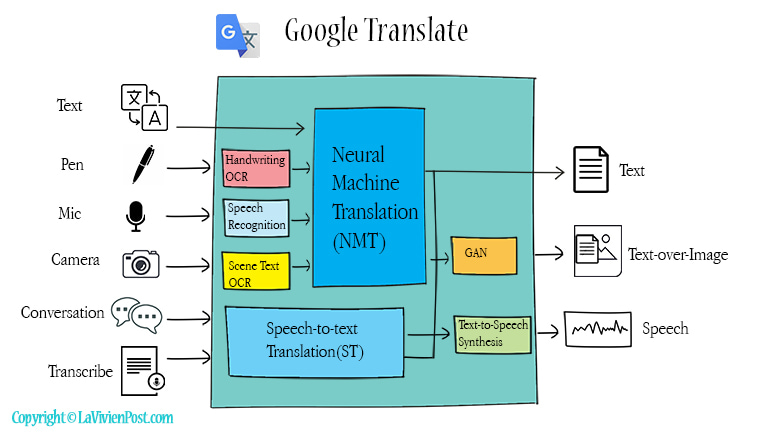 Google translate is powered by the state-of-art AI technologies with neural networks. These include:

In this post, I will explain the technologies used in Google Translate.

Neural Machine Translation is one of AI applications under the umbrella natural language processing (NLP). NLP are technologies to make machines to understand and generate human speech or text.

The basic form of neural machine translation is an encoder-decoder architecture. An encoder converts the input words to vectors; a decoder converts vectors to words in another language. In this model, both encoder and decoder use Recurrent Neural Networks (RNN). RNN is a neural network that uses feedback connections to propagate information from one step to the next.  In NMT, RNN is a stacked multi-layer of Long short-term memory (LSTMs). LSTM is a type of RNN which is capable of perform sequence-to-sequence transfer. 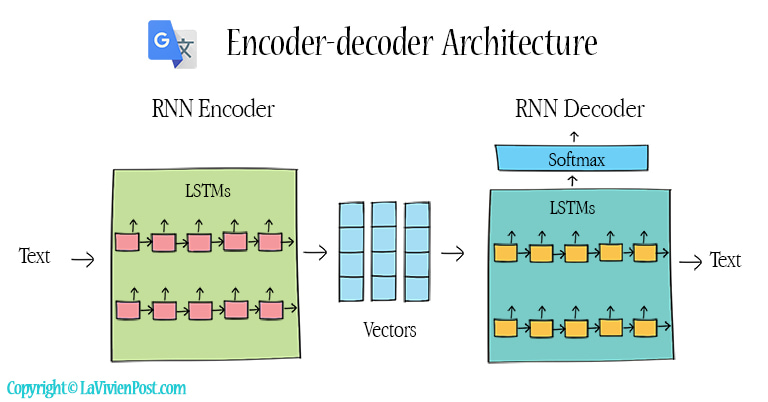 But there are problems with RNN. Different languages have different grammars. The sequence of words in a sentence might not match between languages. Additionally, RNN has difficulty to remember long sentences.

In 2016, Google pushed out Google’s Neural Machine Translation (GNMT). It inherited and enhanced the previous NMT models. Both encoder and decoder had 8 layers of RNN, so that RNN were deep enough to catch subtle irregularities. Each layer ran on different GPUs To improve parallelism.

Meanwhile, there was an attention module sitting between encoder and decoder.  The attentional mechanism connected the bottom layer of the decoder to the top layer of the encoder to achieve good accuracy. 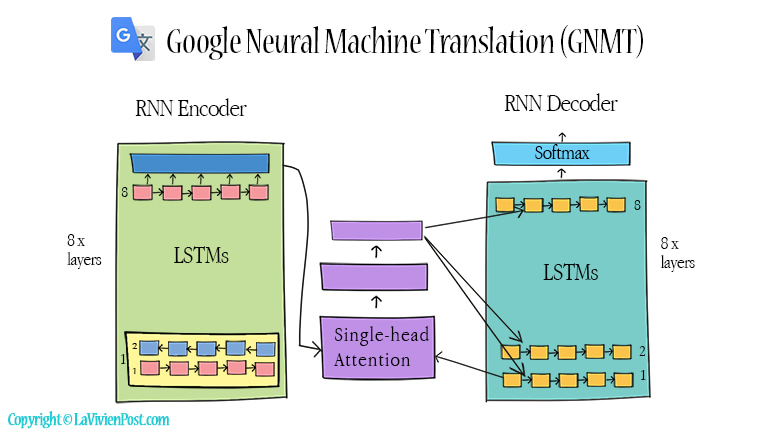 Google team also made other tweaks in their NMT, such as applying one layer of bi-directional LSTM,  residual connections and beam search. All these changes greatly improved the performance of GNMT. A year later, Zero-Shot translation was implemented. The system could translate the language that had never been directly trained on.

In this model, both encoder and decoder have 6 stacked layers. Each layer has sub-layers of multi-head self-attention and feed forward. In the decoder, there is an additional sub-layer of multi-head cross-attention. The cross-attention performs attention function over the output of the encoder layers. This attentional mechanism draws global dependencies between input and output. 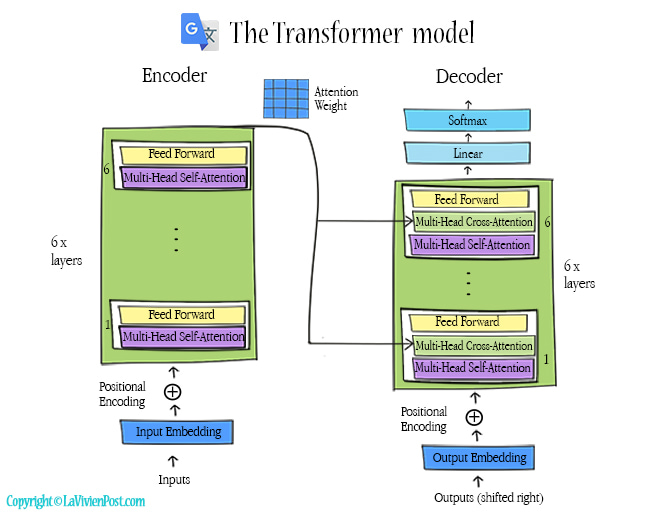 Transformer model is not a sequence-to-sequence transfer as RNN. In order to remember the relative or absolute position of the words in the sentence, a positional encoding layer is added at the bottom of the encoder or decoder stacks. A self-attention is an attentional mechanism which models relations between all words in a sentence. The attentional mechanism compares the given word to every other word. The result of the comparison is an attention weight for every other word in the sentence.

Since there is no sequence, the self-attention functions can run in parallel. A multi-head self-attention has 8 parallel attention “heads”. Their results are concatenated and projected as the output and sent to a feed-forward network. The parallelization takes full advantage of modern machine learning hardware such as TPUs and GPUs, and it is the key to make the transformer efficient and fast.

Nevertheless, Google translation team continued improving their NMT. In 2018, They introduced  hybrid architectures of NMT which combined a transformer encoder and a RNN decoder.  They carried on the experiments and found that hybrid models, mixed with transformer and RNN horizontally and vertically in the encoder, performed the best. 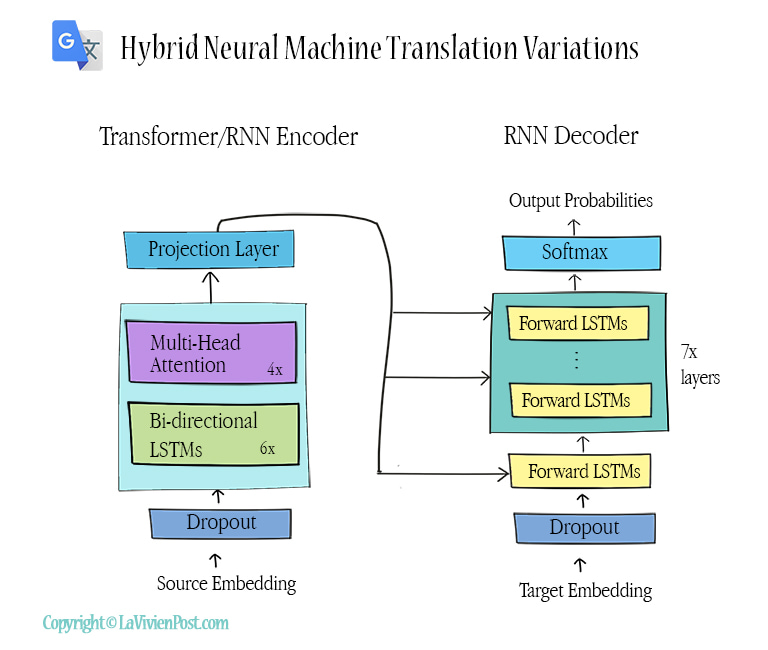 GNMT provides reliable high quality text-to-text translation. It also plays as a middleman in the speech translation and image translation.

In a speech-to-text translation (ST) system, the encoder has pre-trained ASR, the decoder has pre-trained MT. After the translated texts are generated, they are sent to downstream, which is text-to-speech synthesis (TTS). In this graph, TTS uses Google Tacotron 2 model.

In 2019,  Google introduced the first direct speech-to-speech translation, called translatotron. Translatotron could translate speech from one language to speech in another language, without the intermediate text representation. This system was also able to retain the source speaker’s voice.  In  2022, Google pushed out translatotron 2. It outperformed translatotron and approached the performance of the cascaded system. 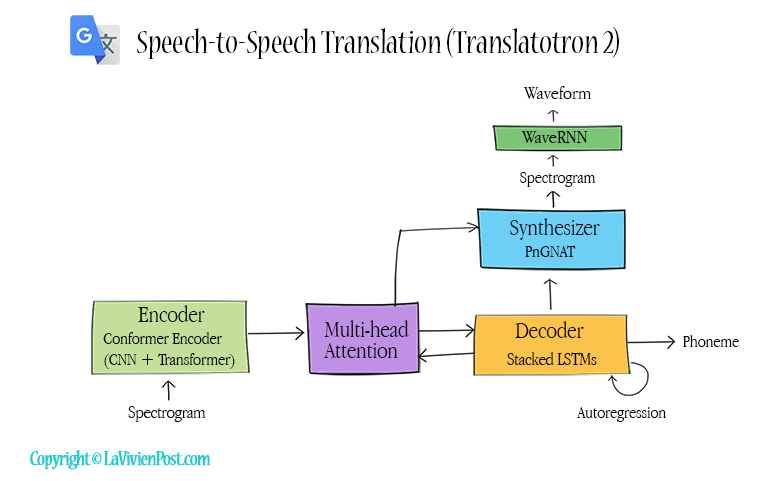 In this model, the encoder contains a speech recognition system Conformer. The conformer combines convolution neural networks (CNN) and transformers. The decoder uses multi-layer LSTMs. It generates linguistic information. A single multi-head attention sits between the encoder and decoder.

A synthesizer performs speech synthesis using a duration-based system Non-Attentive Tacotron (NAT).  The synthesizer is conditioned on the output from both decoder and the attention. After the synthesizer generates spectrograms, a neural vocoder, such as WaveNet or WaveRNN, converts spectrograms to time-domain waveforms.

Google Translate provides handwriting and instant camera translation. The technology behind both is optical character recognition (OCR). OCR is a collection of technologies to automatically detect and recognize the texts on paper or in the wild, and turn them into a digital format that computer can edit, search and store.

Let’s look at handwriting OCR first. When you tap the pen icon in Google Translate and write characters,  The app displays possible letters or words. You can select one of them. Internally, the touch points are the input. The first steps is to convert the sequence of points into a sequence of cubic Bezier curves. Next a multi-layer recurrent neural network (RNN) converts the curves into matrix with a probability distribution over all possible letters. Then the CTC decoder output the characters. Connectionist temporal classification (CTC) is an algorithm to allow  the output labels to have an alignment with the input sequence.

The instant camera translation allows you to point the camera at documents or public signs and translate them. The pipeline includes OCR, machine translation and image synthesis. The text detection uses region proposal network (Convolutional model) to extract the text in the image and puts the bounding boxes around the text. The texts are isolated from the background objects.  Then the text recognition uses NLP-based networks (CNN and LSTM networks) and CTC to convert the extracted information to construct meaningful sentences.

When OCR identifies characters, it also determines the metadata, such as size, font, color and camera angle. This process is called layout analysis.

The recognized texts are fed into GNMT for translation. Down the pipeline, the translated texts are rendered on the top of the original text in the same style, matching the original font, size and length.  It also uses generative adversarial networks (GAN) to rebuild the pixels underneath to make the translation look natural. GAN is a type of deep learning model used to generate synthetic data samples that are similar to a training dataset.

Here is the timeline of Google neural networks technologies.

What is Google Translate architecture?